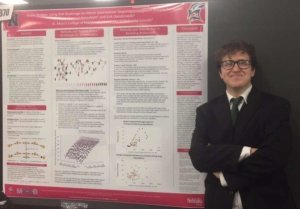 Sam Rosenblatt ’18 presented the results of his original research at the annual meeting of the Southern Regional Honors Council in Arlington, Va., April 5-7.

His talk, titled “Making the Most of the Network Data We Have: The Robustness of Efficacy for Targeted Immunization Strategies,” presented research that is part of a project that started with two separate federally-funded REUs (Research Experience for Undergraduates) Rosenblatt participated in during the summers of 2016 and 2017 at the University of Nebraska-Lincoln, where he worked with other researchers on the Minority Health Disparities Initiative.

Rosenblatt has continued the trend of “Targeted Immunization” research, which uses a model of individuals and their connections, called a “complex network“, to determine ways to optimally choose individuals to immunize in order to protect the population as a whole from disease outbreaks. This particular project uses simulations to investigate how different targeted immunization strategies perform when they are operating under the uncertainty of incomplete data, a common feature of recorded networks of “hidden populations” such as people who inject drugs.