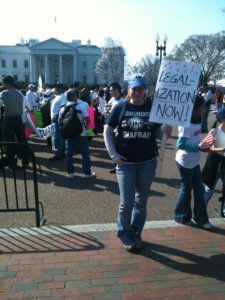 The St. Mary’s College of Maryland Anthropology Department will host Ruth Gomberg-Muñoz, associate professor of anthropology at the University of Chicago, Loyola, for the lecture “On Both Sides of the Wall: Deportation and Mixed-Citizenship Families,” on Tuesday, Feb. 20, at 4:30 p.m. in Cole Cinema, Campus Center. The event is free of charge and open to the public.

Gomberg-Muñoz will present results from a binational pilot project exploring the challenges facing families that are separated or relocated by deportation to Mexico. Deported parents are often separated from their U.S. citizen children and can lose parental rights. Parents who bring their U.S. citizen children with them often encounter bureaucratic barriers to accessing dual citizenship for the children, who may experience prolonged periods of “illegality” and exclusion from school and government services in Mexico. For people who migrated to the United States without their families, return often means family reunification after a long estrangement, and couples grapple with divergent expectations for their roles as spouses, parents, and sexual partners.

Gomberg-Muñoz is the author of two books, “Labor and Legality: An Ethnography of a Mexican Immigrant Network” (2011), and “Becoming Legal: Immigration Law and Mixed Status Families” (2016), as well as numerous journal articles.