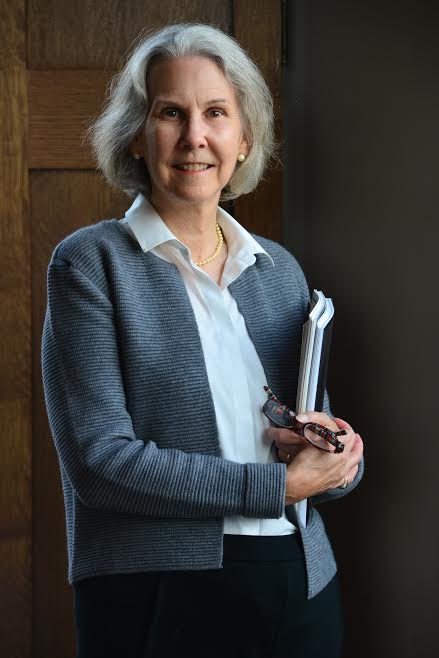 At a conference among 1,400 of her peers, St. Mary’s College of Maryland Professor of Anthropology Julia A. King was named the 2018 recipient of the Society of Historical Archaeology’s most prestigious award in recognition of her contributions to archaeology spanning decades.

Established in 1981, the J. C. Harrington Award is named in honor of Jean Carl Harrington, one of the pioneer founders of historical archaeology in North America. The award is presented once a year for lifetime contributions to the discipline centered on scholarship.

“I’m still pinching myself,” King said of having received the award Jan. 5 during the society’s annual conference held this year in New Orleans, La.

She was nominated by longtime colleagues and friends Patricia Samford and Ed Chaney, director and deputy director of the Maryland Archaeological Conservation (MAC) Laboratory, located at the Jefferson Patterson Park and Museum in St. Leonard, Md. Along with Samford and Chaney, 77 scholars, professionals, and current members of the SHA endorsed the nomination.

J.W. Joseph, immediate past president of the SHA, said King was “highly deserving” of the award.

“Julie is one of the premier scholars of the historical archaeology of the mid-Atlantic and the author of numerous books and articles.  She served the SHA as president and in other roles and has provided greater assistance and support to the society. Julie was also selected as the first archaeologist appointed [by President George W. Bush] to the Advisory Council on Historic Preservation, where she provided expert guidance on archaeological practices and developed guidelines for the treatment of human remains. I cannot think of a more deserving recipient,” Joseph said.

King said the list of past recipients is akin to being among the “who’s who” of her profession.

“To have a spot in that distinguished line-up…oh my gosh,” she said.

King’s contributions to historical archaeology date back to the early 1980s, but her interest in the discipline, she said, goes back to when she was in grade school.

Her interest developed in part due to her father’s work in excavating construction and her mother’s work and interest in history.

After more than 30 years in the profession, King’s interest in archaeology remains strong.

“I wake up every day excited about archaeology and discovering new things with my students,” she said.

Chaney said one of the things he and Samford emphasized in the nomination letter was King’s collegiality and her willingness to share data and work with others on projects.

Samford said when it comes to her collaborating with others, it’s not just archaeologists but historians, descendant communities, Native Americans, students and many others in the community.

King said she is most proud of “Archaeology, Landscape, and the Politics of the Past: The View from Southern Maryland” because, “it’s about why we do archaeology and the kinds of stories we tell.”

King studied anthropology at The College of William and Mary on the advice of a professor at St. Mary’s College, which, at the time in the 1970s, did not have an anthropology program.

She went on to complete her master’s degree in anthropology at Florida State University, where she worked in St. Augustine. She earned a doctorate in American Civilization with a focus in historical archaeology from the University of Pennsylvania, Philadelphia.

Prior to teaching, King worked at the Jefferson Patterson Park and Museum as the director of the MAC Lab. King began at St. Mary’s College as an adjunct professor in 1986. She came to St. Mary’s full time in 2006 as an associate professor, becoming a full professor of anthropology in 2013.

She said one of the things she is proudest of is the impression she’s made on students. An impression not fully recognized until the night of the ceremony, when a number of her current and former students were present for the celebration.