Chopin and Musical Gardening: Early and Mature Mazurkas and Polonaises

St. Mary’s College of Maryland Musician-in-Residence Brian Ganz will continue his popular PianoTalk series on Tuesday, Dec. 6 at 12 p.m., as part of the Alice Fleury Zamanakos and Arthur S. Zamanakos Noon Concert Series. The performance will be held in the Auerbach Auditorium of St. Mary’s Hall on the college campus. The PianoTalk is entitled “Chopin and Musical Gardening: Early and Mature Mazurkas and Polonaises.” The program is free and open to the public. For more information call (240) 895-4498 or visit https://dev.smcm.edu/music/events.

Ganz returns to his theme of Musical Gardening, in which he shows how early works of Chopin contain the seeds of his genius and more mature examples of the same genres demonstrate the full flowering of that genius. In this program he will explore musical gardening in Chopin’s most beloved Polish dances, the mazurkas and the polonaises.

“The earliest polonaise I’ll play and discuss on this program is one Chopin composed when he was 11 years old. It is fascinating to hear his voice beginning to emerge at such a young age. Then I’ll play another polonaise from just three years later. It’s full of virtuosity and sparkle- a little too much, even, but it’s fun to realize that as a teenager Chopin showed some of the same bluster and bravado that most teenage boys demonstrate at one time or another,” said Ganz. “Each of these pieces shows the seeds of the master’s genius. Then I’ll move on to the famous ‘Heroic’ Polonaise to demonstrate the fullest bloom of that genius. I’ll do the same ‘musical gardening’ with three of his mazurkas.”

Ganz has appeared as soloist with such orchestras as the St. Petersburg Philharmonic, the National Philharmonic, the Baltimore and the National Symphonies, the City of London Sinfonia, and L’Orchestre Philharmonique de Monte Carlo. He has performed in many of the world’s major concert halls and has played under the baton of such conductors as Leonard Slatkin, Mstislav Rostropovich, Pinchas Zukerman, Jerzy Semkow and Yoel Levi. 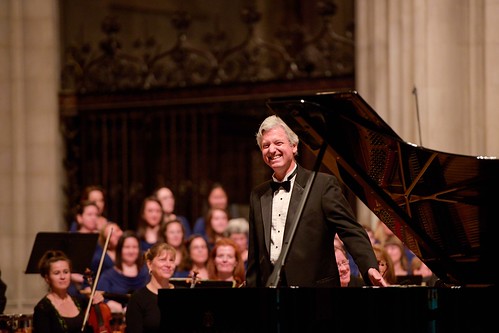